It took a few weeks after restoring the Craftsman Jointer (model 113.232240) to get going on a dust/chip collection upgrade, but now it’s done. It’s not going to win any beauty awards, but it’s functional and works awesome. Not bad for making it up as I went. 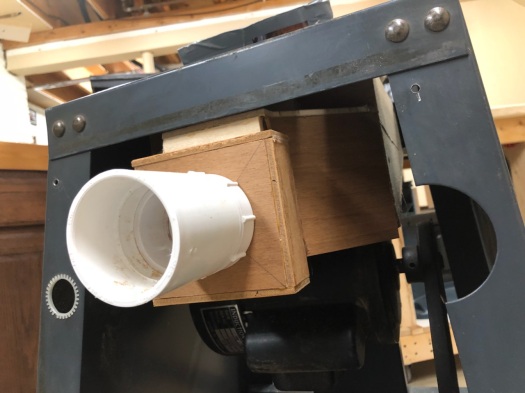 The previous owner had installed these two side panels and basically let everything fall to the bottom of the stand. Not sure how well it worked, but I knew I could do better. 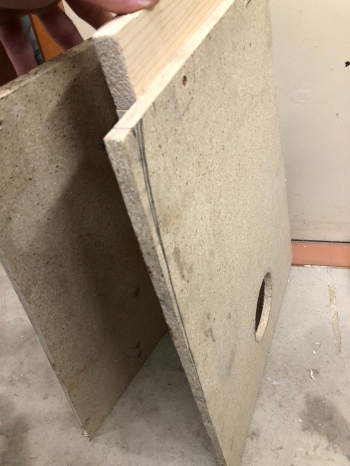 I figured I could build some type of chute that would fit up between the motor and the bottom of the machine.

My first idea was to create some type of cardboard model that I could reference for building a real box. This was a terrible idea trying to work up under the machine and as soon as I took it out, it basically fell apart.

Then I had an idea to cut up this popcorn tin and build the dust chute out of it.

I’m still not sure how I managed to keep all my fingers or not even draw a single drop of blood; those edges get extremely jagged and sharp.

In the mean time I made a trip to Home Depot and found some PVC pieces that would work with my dust collection hose.

The tin pieces worked ok, but I wasn’t confident in the duct tape holding up, especially as a means of keeping it connected to the stand. It was not a wasted effort though because I ended up using the pieces as you’ll see in the video. 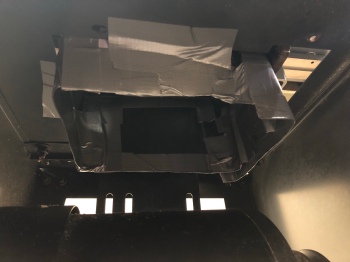 While working on this project, I realized I really enjoyed the engineering process and solving problems when I made a mistake. I didn’t include footage of the mistakes but there were some epic ones. At some point in the build I stopped checking the fit inside the stand, so when I put it in place I shouldn’t have been surprised that some of the lower parts were smacking into the motor. After fixing that problem, the box for the power switch was in the way, which is why I moved it to the other side of the stand. Finally I forgot the motor needed to be raised in order to get the belt back on and there was no room to spare. Luckily this last problem was the easiest to fix because the motor mount could be flipped over, getting me 3-4 inches of clearance. I picked a 6 inch longer belt at AutoZone.

I imagine you could build something similar for most jointers. If you come across this post and it helps you out, let me know.

I'm searching for the perfect golf swing and my first hole-in-one. I'm addicted to CrossFit. I work for Automattic.