Part 1 covered the devices I’m using for home automation. It’s been over a year and there have been some changes. I added a Leviton switch and got rid of the Wink hub.

This post will be about the software that brings things together, making it easy for me to manage and allows the devices to “talk” to each other. Maybe it’s a good thing it’s taken me almost a year to write this part 2 because there have been some dramatic improvements to how everything runs. I was using homebridge for a period of time, but found I never really used HomeKit/Siri. Home Assistant has been updating a new HomeKit component, so I’ll have to give it a try.

I’ve talked about Home Assistant in a lot of posts; it’s the software running on the Raspberry Pi 3 Model B to handle everything. It’s very powerful software and has been a lot of fun for me to configure everything. Being on a Linux box and having to configure everything through YAML files makes it a tough entry for the average homeowner though. It’s improved a lot in the year I’ve been using it with better documentation and some UI configuration tools, so it’ll be interesting to watch for the next 12 months.

Being Open Source was a big draw of HA for me. Open Sourcecraft has a good article about the creator. The project operates on an aggressive schedule you don’t see much; every 2 weeks a new version oh Home Assistant is released. These aren’t small updates either. Each update fixes a ton of bugs and adds support for new devices.

I did install HA using Hass.io, which simplifies the process and makes it easy to do upgrades and install add-ons. Here are the add-ons I’m using.

In addition to running Home Assistant, I wrote a couple of small services I run on Pis. The first is the temperature sensor/monitor I use in my garage. I’ve improved it a lot in the last year. The second service is home-assistant-pi, which reports a bunch of data about each Raspberry Pi on my network back to Home Assistant, which you’ll see in the screenshot below.

The beauty of Home Assistant is you can set everything up the way you want. Your limitation is your imagination and your comfort level with configuration files and code. I took a bunch of screenshots of my setup.

I keep all of my configuration (except the secrets file) in a GitHub repo in case I mess something up. I’ve learned a lot by looking at other examples, so my repo is public as well. Maybe my config will help out someone else. The repo is home-assistant-config. If you have any questions about anything you see in this post or in my configuration, let me know.

In the final post of this series, I’ll explain the cool part of this whole thing, the actual automations. I need to go through my ideas list and implement all of them though.

After the recent changes to my home network and Home Assistant server, I noticed the logs in Pi-Hole were being dominated by the domain I use for dynamic DNS on the box. Roughly 15,000 DNS requests a day out of 30,000 on my entire network. Really skews the ad blocking stats.

Why so many DNS requests? Because home-assistant-pi and home-assistant-temperature-monitor were both using the Home Assistant REST API to fetch data. That’s 15k requests/day with only two of my seven other Raspberry Pis turned on, so it would get worse when I put some of the other Pis into “production” around the house. The temperature project only runs on one box, but the first project in installed on every Pi.

I briefly tried to switch those two projects over to using the local IP address of the server and continue to use the REST API, but with SSL enabled it was complicated. MQTT was already running on the server and those projects publish updates to Home Assistant over MQTT, so it was an easy decision to use it for subscribing as well.

While I was at it, I took the opportunity to simplify a lot of the code and have the devices update more frequently. So far it seems to have solved a couple of lingering stability or connection issues I was having with home-assistant-pi. All of the code changes are available in the respective GitHub repos linked earlier.

Update: I forgot I had home-assistant-pi connecting to google.com in to help with determining the local IP address in Python. Another update to clear that up will eliminate over five thousand DNS requests per day.

My router had been flaking out, so I picked up a Eero with 1 beacon. Setup was smooth and painless. I decided to use a new Wi-Fi network name, which was not one of my best ideas; reconfiguring about 30 devices was a pain in the ass! 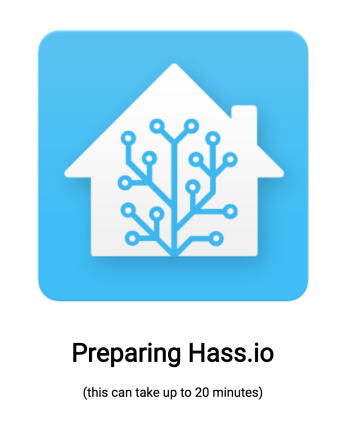 While I was working on my network I took the opportunity to do a fresh install of everything on the Raspberry Pi server running Home Assistant and Pi-Hole. Instead of installing Raspbian and all of the software myself,  I took advantage of Hass.io, which is a preconfigured image and works well. When I first started using Home Assistant, the project was pretty immature so I didn’t use it.

Figured I might as well keep going, so I also made a bunch of improvements to the Raspberry Pi Temperature Monitor I use in my garage. Seems to run much more stable, which may also have something to do with the fresh Home Assistant install. Changed a few things with home-assistant-pi as well.

Another big change I made to the server is connecting it to my network via ethernet instead of WiFi. It’s wired in through an AirPort Time Capsule, which is connected to the Eero via a really long cable running through the basement. I bet this has done more than anything to improve the stability and consistency of my system. A bonus of this connection change is the Speedtest reporting inside HA is much more accurate.

Now I need to make time to get more automating done in Home Assistant and publish part 2 and 3 of my home automation series. It’s coming up on a year since part 1, so long overdue.

My garage temp sensor, running home-assistant-temperature-monitor stopped working several months ago. I didn’t have time to figure it out and then summer hit, when it’s not important since I don’t heat up the garage before I workout. This weekend I finally got around to troubleshooting the problem.

Turned out I needed to install Adafruit_Python_GPIO. I must have updated my code at some point without fully testing, otherwise I’m not sure how any of it worked before. I didn’t investigate that though; I was more concerned with fixing it and doing some improvements. I updated the OS and everything on the Raspberry Pi since it hadn’t been turned on in quite some time.

Earlier this year, another Pi on my network, the one running Home Assistant and Pi-hole, ran out of disk space without warning. I’ve wanted to put in a notification system so it never happens again, so I updated home-assistant-pi to report the disk use % to HA. I added an automation to notify me whenever it’s above 90% for one of my Pis. I also reworked all of the automations in home-assistant-pi to make it easier to configure each time I get a new Pi.

That all took much longer than I expected. Most of the trouble was trying to understand the Jinja template system used in HA and where it can be applied to configurations. I think I’m finally getting the hang of it.

While writing this post, I found an old draft with some other updates to home-assistant-pi I never published. Maybe I never finished and that’s why everything stopped working! Here’s a list of some previous updates:

Now that this stuff is running again and I have a better understanding of the Home Assistant automation capabilities, I need to continue the series of posts I planned on home automation. It’s been five and a half months since I published Part 1!

With all of the Raspberry Pis I have (now up to 6 after adding “flapper”), I wanted to get a bunch of data in Home Assistant (yes, I’m still working on a larger home automation post) and have an easy way to reboot or shutdown each computer.

I wrote a little app which runs as a service on each Pi. Here’s an example of what shows up in Home Assistant. 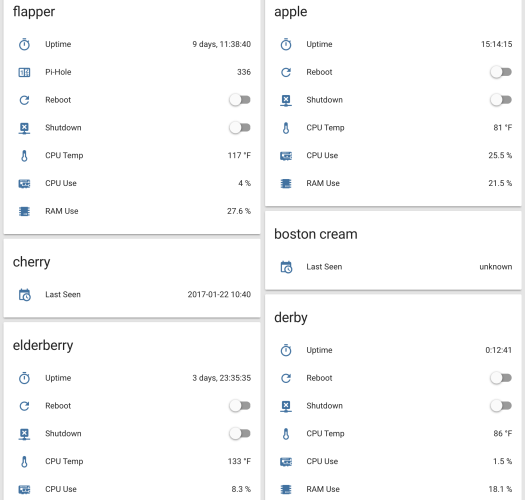 The Python app and sample Home Assistant configurations are in my home-assistant-pi project on GitHub. Of course it’s all Open Source.

I made some updates to the Garage Temperature Sensor & Monitor. I didn’t like how the desired temperature was set via the app’s configuration file, so I moved it to a slider control in Home Assistant and updated the LCD to always show the value. Only being able to enable/disable monitoring via the device’s button also wasn’t great. I converted the binary sensor I was using to flag monitor mode in HA to a switch control and moved the actual monitoring logic from the Python app to HA automation. Everyhing is updated on GitHub.

I’ve been working on this project here and there for a few weeks, with most of the early work being experimentation. Everything is now up and running and it’s “deployed to production” so to speak. This was my prototyping setup…

After wiring everything together and repurposing a cardboard box, here is a short video to show the final product.

A few notes on how it works:

Really happy with how things turned out. The Pi  I wrote this in Python and it’s all available as home-assistant-temperature-monitor on GitHub if you want to make your own or use some of the code for your own project. There is also a list of all the components used.

Here are some pictures I took while assembling the enclosure/box.

Update: Adafruit released a new Learn guide that does some similar stuff to this project.