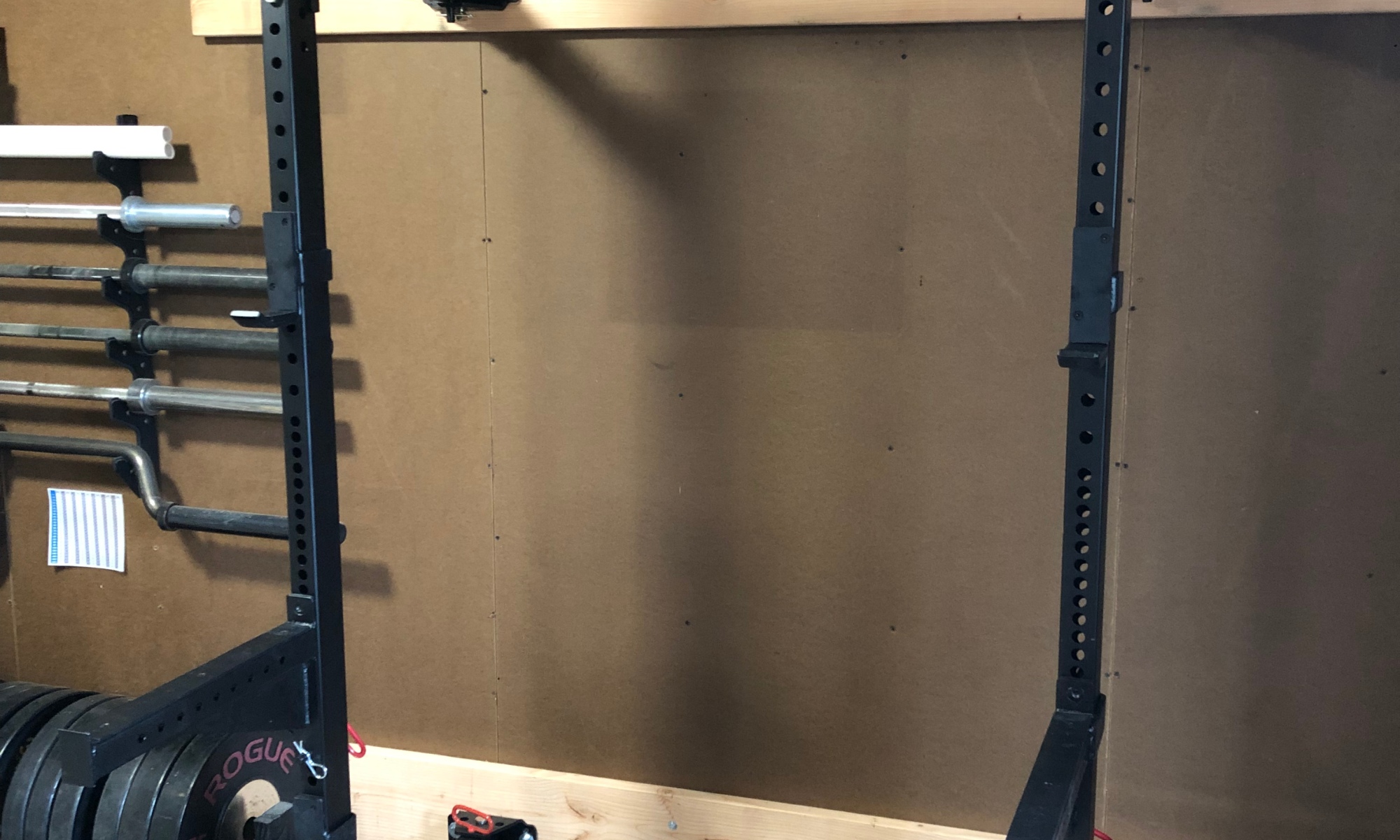 Yesterday I installed a folding power rack in my garage, which completes my garage gym reorganization. Since I now have a truck and a car, I didn’t want to dedicate half of my garage to the gym; I wanted to park both vehicles inside all year. I needed to significantly compress my garage gym space.

If you’ve been following my blog, you may remember posts where I created custom dumbbell storage, made a barbell accessory organizer, and figured out a way to store mats against the wall. I’m not sure if I talked about it in previous posts, but I removed the lifting platforms and sold my large Rogue R3 power rack, which took up a lot of floor space.

I wanted to get a wall-mounted folding rack. Rogue’s small one is $495, with another $163 for spotter arms, and doesn’t have free shipping. I found the Titan Fitness 21.5″ Fold Back Wall Mounted T-3 Power Rack, paid $284 for it, another $74 for spotter arms, and it shipped free. About half the price of Rogue’s option! It even comes with an extra set of J-hooks.

Let me explain how I did a solo install of the rack.

Unfortunately there weren’t any instructions in any of the boxes. There was a card showing a URL to download a manual, but it was a broken link. I emailed Titan Fitness in case anyone was working on the weekend. I got a general idea of the install from a couple of YouTube videos, but mostly came up with my own method, which worked out really well.

The first step was a shopping trip to Home Depot.

With the rack parts on the ground I bolted the swing arms to the uprights and connected the cross-bar. I stood it up against the wall to get a feel for how everything would go. I figured out the middle of the top stringer could go about 6’5″of the floor and the middle of the bottom could be 11″. With eight foot boards I could span six studs on the wall and screw in to four of them. I measured out the 16″ spacing on the boards and drilled eight holes.

Perhaps the trickiest part of the install to do by myself was figuring out how to get the heavy stringer on the wall make it level. With a stud finder I found the right most stud at 6’8″ from the floor and drilled a hole. Then I put a 1/4″ x 5″ lag screw in about 2/3 of the way to temporarily attach the stringer to the wall. The other end of the board was on the ground while I did this, so I didn’t have to support its weight.

I repeated the same process for the bottom stringer, which was easier since it was so close to the ground. 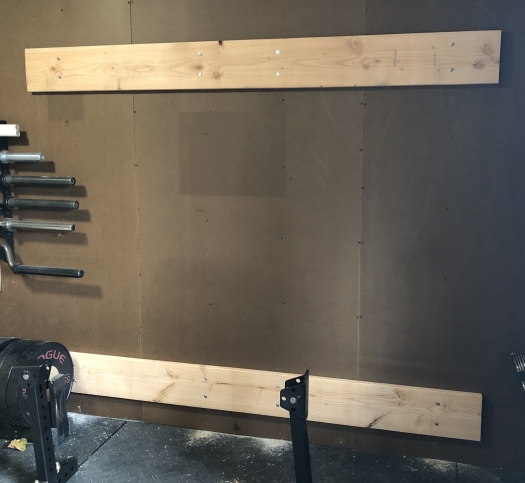 I had to think about the next step a bit. Other people seemed to prop the entire rack up against the wall to figure out where to attach everything. With my floor sloping from right to left (back to front of the garage), I knew I’d have to shim up the left upright when the rack was open. I decided to do the right upright on its own first.

I had measured the width of the cross-bar, telling me the middle of the mounting brackets would line up pretty close to the studs I hadn’t attached the stringers to. I propped the upright up against the stringers and used a framing square to line it up. I also used a level to make sure the uprights were straight up and down. Some 1.5″ drywall screws temporarily attached the brackets to the stringer. I wanted to be sure it would swing against the wall before drilling holes for the lag screws. Since the rubber foot was solid against the ground, I had to give it a good push, but once it was free, it swung great. I drilled through the big holes in the brackets and used 1/2″ x 2.5# lag screws to solidly attach the brackets to the stringer.

With that first upright in place I propped up the left upright and attached the cross-bar. I once again used the square to line up the arms with the stringer and a level to get it straight up and down. Now I had to make the uprights sit level with each other, so I placed a long level across the support arms of each upright. I kept adding shims until the bubble showed level. Rechecked square and upright level before I attached with drywall screws again. I removed the cross-bar and shims to make sure this one could swing up against the wall too. All was good so I drilled and put in the lag screws.

In the picture above you can see some shims under the left upright. According to Home Depot’s product page…

Can easily withstand up to 16,000 lbs. of pressure

Everything easily folds out of the way.

With a bunch of extra space on the side of the stringer, I used screw hooks (free from Menards) to hang bands, jump ropes, belts, etc. 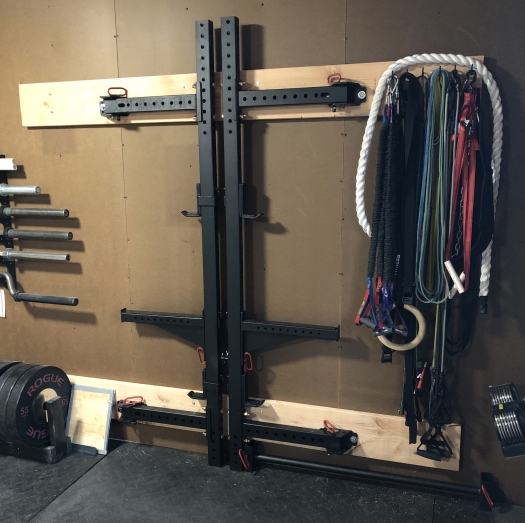 After finishing with the install I used the rack for shoulder presses and everything felt solid. I’m really happy with it and glad I found Titan Fitness instead of spending twice as much at Rogue Fitness.

Designating the rack as 21.5″ in the product title is misleading because that is the length of the swing arms. With the stringers, mounting brackets/hinges, and depth of the upright, the end of the rack is about 26″ from the wall. Also of note is that the diameter of the cross-bar is 2″, which is in between a normal pull-up bar and a fat bar. This will give me another option because I have a ceiling mounted pull-up and a set of Fat Gripz.

Later in the evening Titan responded to my email and sent the manual, so I’ll include a download link here for anyone who wants it. After seeing their instructions, I like the installation method I came up better because pretty much all garage floors are sloped and I installed everything by myself. It took me about 3 hours of work time, which was a lot of measuring and remeasuring.

Here is a 2013 photo of the garage gym, which was still pretty close to what it looked like a few months ago.

I still have the pull-up bar hanging in front of the back door as well as a Ski Erg, Airdyne, and treadmill on the other side of the garage.