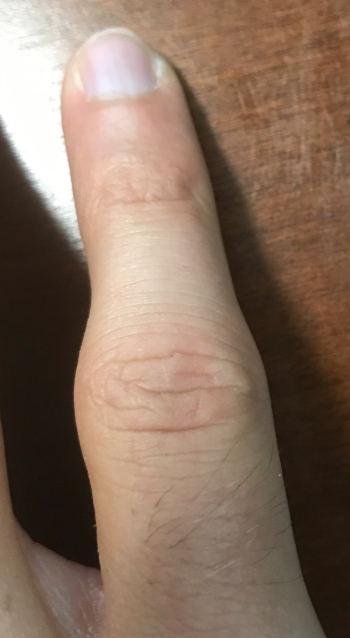 I’ve been using the interlock grip to hold golf clubs for as long as I can remember. About a month ago I noticed my right pinky finger was swollen at the knuckle, which happens to be one of the two fingers involved in the interlock. It feels like I have a constantly jammed finger.

It seemed to be slowly getting worse after each round of golf and got to the point where I couldn’t fully bend it. After doing some Googling, it seems to be a common problem, even though I’ve never had it happen to me. I’m not sure what I’ve been doing different, but it’s not comfortable. Time for a change.

Even though I’ve used the interlock for chipping, pitching, and full swings, I’ve used a reverse overlap grip (left pointer overlapping right pinky) for putting because I’ve always liked the feel of it. I’m pretty sure I first learned about it when reading Tiger’s book “How I Play Golf.” So I set out to try the Vardon Overlap Grip, as it’s also known, for every club in the bag.

Yesterday was the first round trying it out. It was uncomfortable and I “topped” quite a few shots. I didn’t realize I was using opposite overlaps for putting and everything else until the 10th hole. From there on out I overlapped like I do for putting on every shot. It was much more comfortable and I started hitting better shots.

Last night I looked around online. I learned that the overlapping grip tends to be better for players who have large hands, like me, while the interlock is usually better for players with small hands. It turns out Jordan Spieth uses this reverse overlap grip.

It’s going to be a work in progress because every time I gripped the club my instinct was to interlock. It’s hard to change something you’ve been doing for more than a decade. At least for now, my swollen pinky acts as a mental trigger to switch it up when I go for the interlocking grip.
​