The range we put in last year tripped the breaker whenever we ran the quick boil burner and oven together. I checked the manual and the unit runs best off a 50 amp breaker, so I finally got around to replacing the 40 amp one along with 6 gauge wire to replace the 8 gauge.

I started this build a couple of weeks ago and “finished” it today. It is supposed to be a battery replacement kit for use in prototyping if you run out of batteries. It was project #12 in the Boldport Club.

Mine, did not turn out to be a useable device, because I shorted the connections in the USB connector, which I put on last and should have done first. If there’s one complaint about the Boldport Club kits it’s that the instructions are lacking. I messed around with different desoldering techniques to try and correct the problem, but I might have been fighting a losing battle depending on how deep in there the shorted connections were. I figured something was screwy when the LED never lit up. Then when I connected a 9V battery as the power source instead of USB I knew something was really wrong. With a multimeter I was only getting millivolt readings from the board. I felt the battery and it was really hot, so I disconnected to read the battery it was down to less than 9 volts already, when it had started close to 9.5! That’s when I called it quits.

I’m almost positive I thought this kit was something else when I ordered it with credits I had. I can’t see myself using this during a project if it had been a success, so I’m not too disappointed. Even though it was a failure I figured I’d still post the video. Since it was just over five minutes long at 20x speed with all of the footage I didn’t even bother to do any editing. The camera had filled up somewhere during the desoldering complications and I was too frustrated to bother with getting a new SD card. Enjoy! Or not.

I’ve been able to revive a dead power tool battery before, but Ryobi has some extra protection so you can’t trickle charge them from the contact points on the outside of their batteries. I was able to use a method I found on YouTube to trickle charge from the inside and the battery is working again.

When I say “dead battery” I mean the charger status shows the battery is defective. It can do this if the battery completely loses all of its power or the cells become imbalanced. The charger has built-in safety measures that prevent it from charging batteries in this state.

Be aware that opening the battery like this will void the warranty. Due to the special screws (T10 with a hole) I bought a security bit set from Menards for $5.

Update: A second battery went dead the day this was published. This method resurrected that one as well.

Giant batteries may be the answer. Learned some cool stuff from this video.

The Tesla Orchestra did a show with their mini Tesla coils almost every hour at Maker Faire Detroit.

Each spark unleashes a bolt of plasma that makes the air explode. Repeat these explosions fast enough and you get a musical note. Four coils, four notes. Custom electronic hardware and software convert MIDI encoded music to pulses of light. At the other end of four fiber optic cables, the powerful amplifiers in the bases of each coil transform 300 volt DC power into hundreds of thousands of volts of musical lightning.

Even in slo-mo, lightning is fast!

A couple of weeks ago I built a 5v relay module, but realized the relay wasn’t sufficient for my needs. So I had to order a heftier one that could handle more than 0.5 amps of current.

I was under a time crunch and couldn’t wait for a 5 or 10 pack, which had longer shipping times, so I had to go with a set of 2 for $5.99. These are basically the same relays used in all of the manufactured modules you can buy for less than $5, especially if you buy multiple units.

I set up my GoPro overhead and talked through the build process of my new relay module. It was not a smooth process, because I finally messed up my wiring, which I’d been so proud of hitting a 100% success rate on first attempts when putting together circuit boards. I not only messed up, but I realized my mistake, and then fucked it back up after thinking I was right the first time.

I forgot to take any good pictures of the completed relay module this time around, so here is a blurry screenshot I grabbed from the video, showing the original relay module, the non-working version (which I’ll eventually fix up), and my final version. Similar to whenever I screw up and lose a bunch of code, I made it a personal challenge to turn out my best work on the redo. As you can see, my final version saved a lot of space. 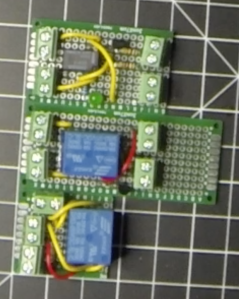 Now that I’ve created my own relay modules, I won’t do it again unless I have specific requirements. Buying the same thing already made is a lot more time effective. It was fun and a great learning experience though. Here’s what the wiring diagram looks like spaced out on a breadboard. There isn’t much to it.

You can grab Fritzing files over on GitHub. Two things that helped me out a lot with this build were a video Homemade 5V Single Channel Relay Module Shield For Arduino, PIC, AVR and an article Turn Any Appliance into a Smart Device with an Arduino Controlled Power Outlet. Between finishing my build and writing this post, I also came across Arduino Controlled Power Outlet on Electronics Hub, which is a neat site with a lot of great circuits and tutorials.

There also ended up being a part 3 to this.

You can buy all sorts of 5V relay modules on Amazon for as little as $3-4 (probably even less if you get really cheap). They even sell boards with multiple relays if you need to switch more than one thing. Since I had all of the necessary parts I built my own. Yesterday I finished the board, because I had to do something before National Week of Making ended. 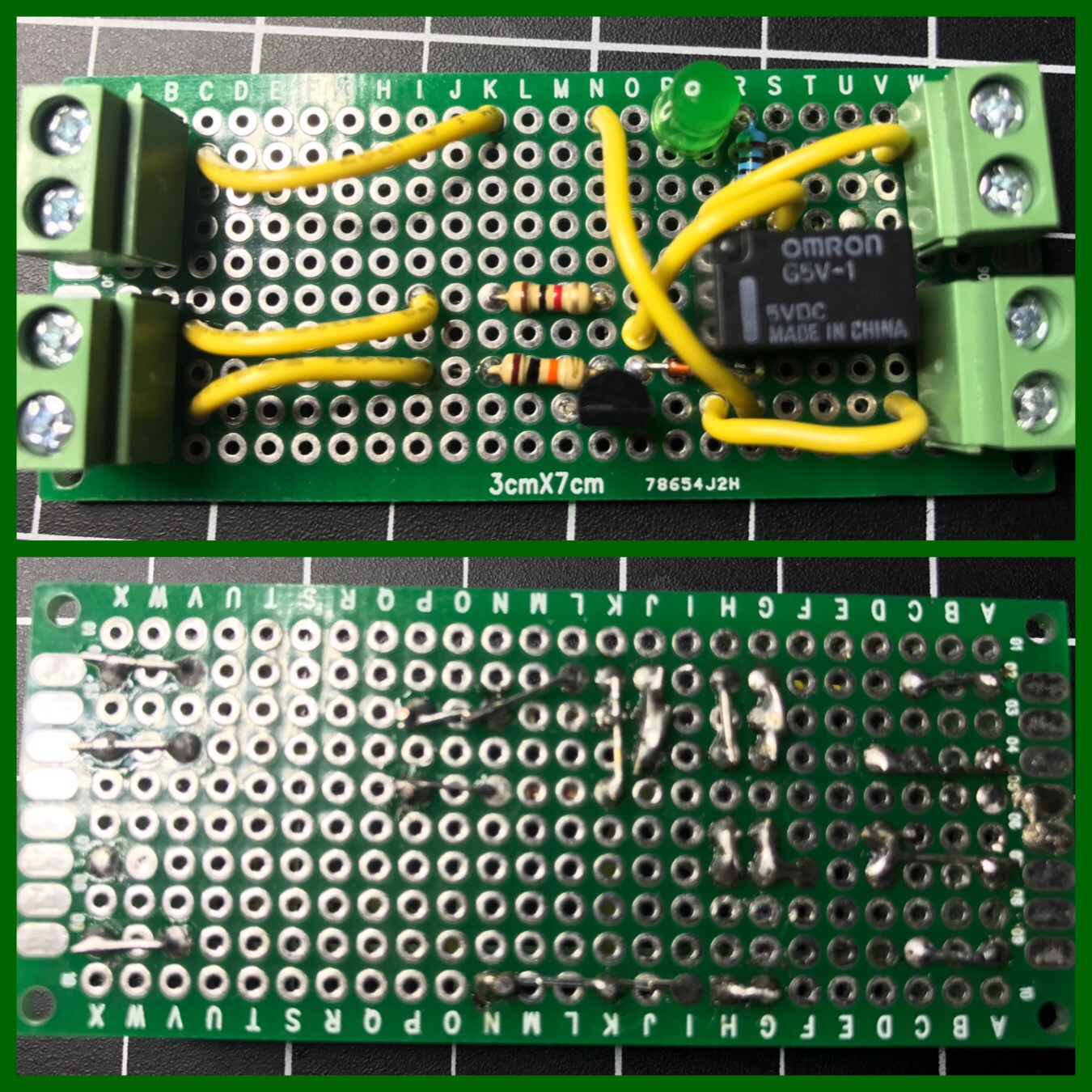 It worked great switching power from a 9V battery, but the real test was hooking it up to mains power. Electricity gets a lot more dangerous at 120V! It was a little scary plugging everything in and flipping the input, especially after reading so many warnings online, but there were no sparks.

I need to pick up a plastic outlet box to house everything so it’s safer with the exposed soldered circuit board in there; I don’t know what I was thinking when I bought a metal one. I’ll publish a more detailed post this weekend when it’s complete.

Update: I realized the relay I used in this module can’t handle the amount of current I need, so I ordered a different type of relay and will be making a new module. I’ll take the opportunity to make a more compact design as well. I did shrink this one a bit and cut off some of the board. I’ll save this module in case I ever need it for a project. 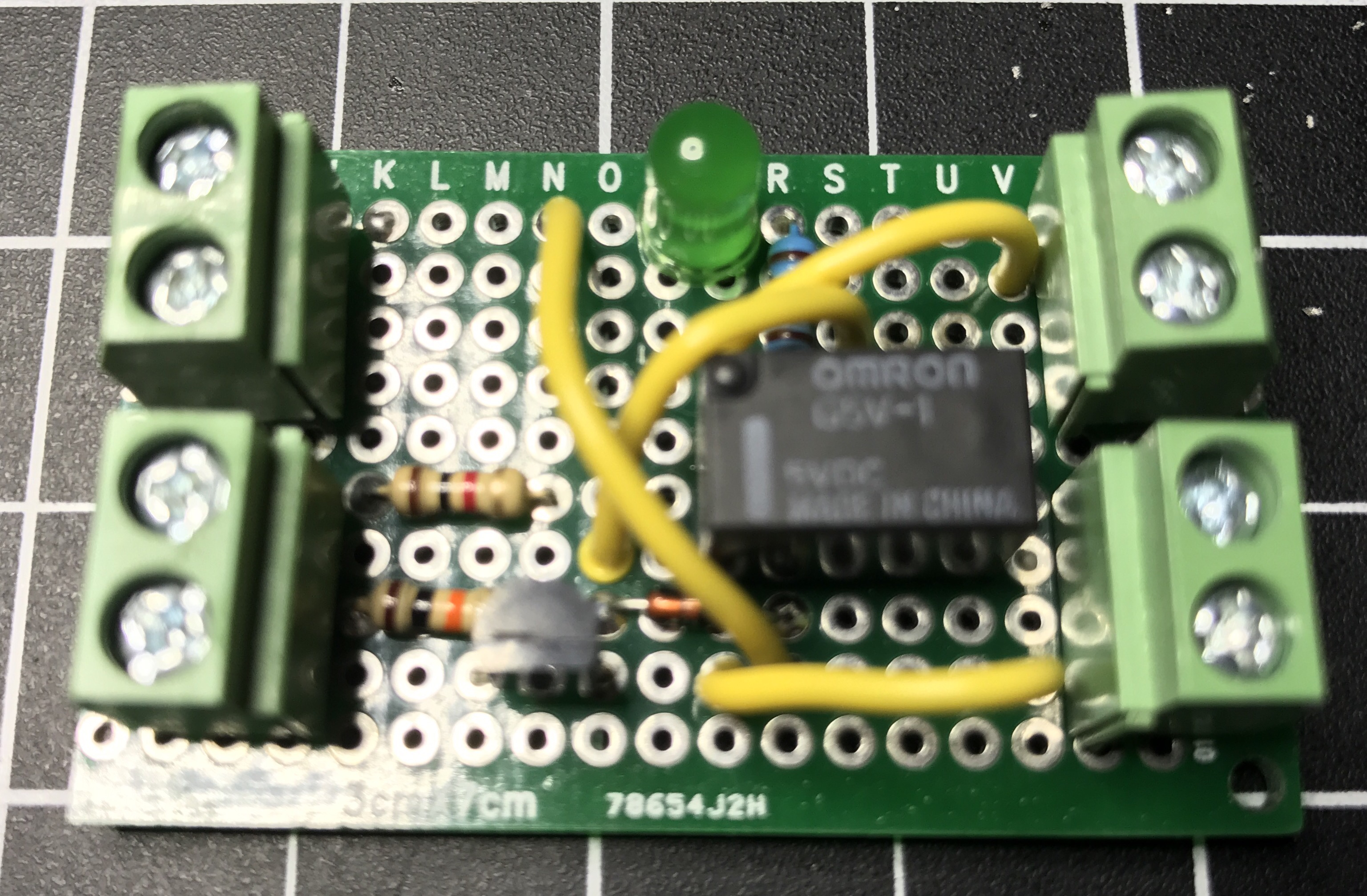 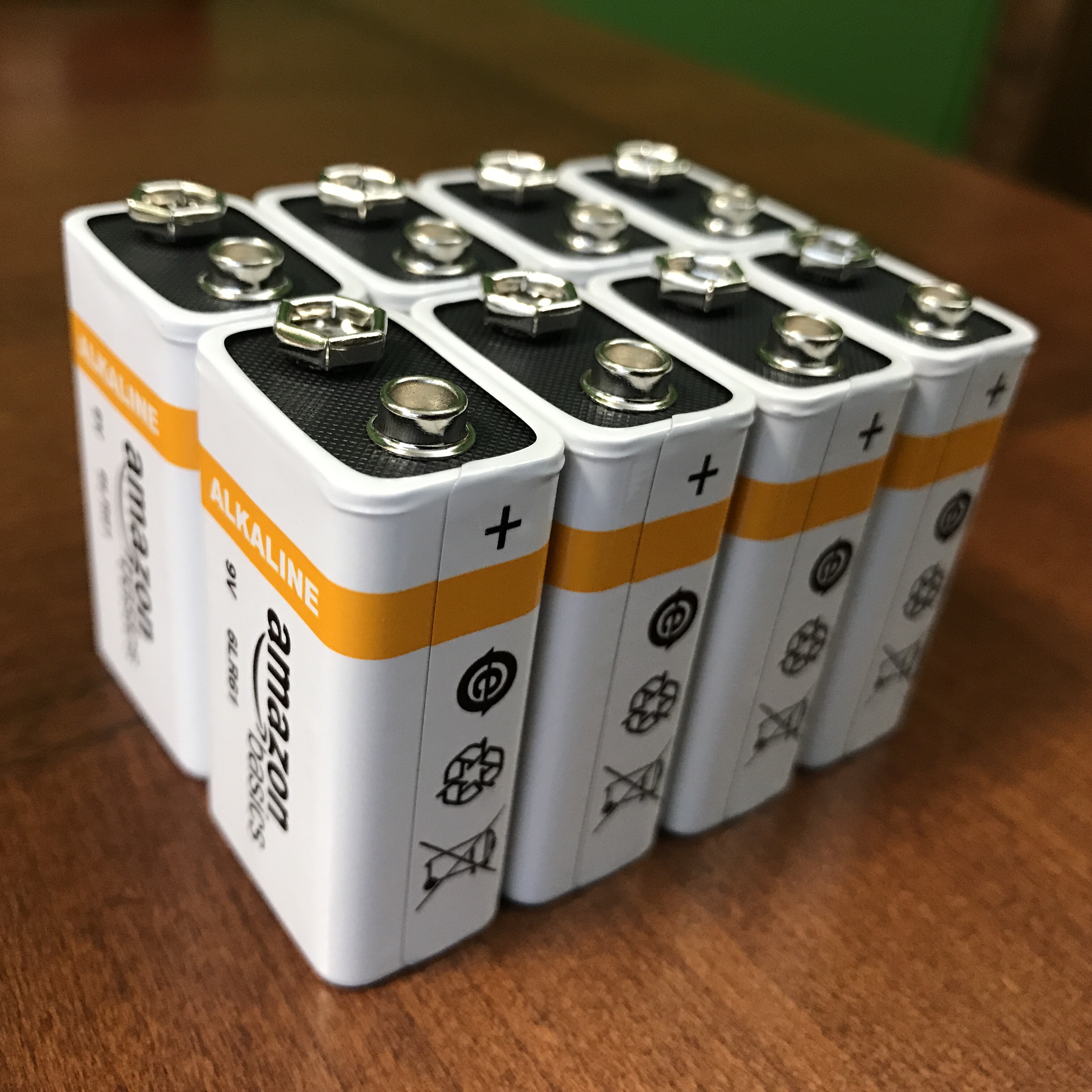