I started doing CrossFit and eating Paleo on October 31, 2011. Today puts me over the 3 month mark, which has been a brick wall for me when I did programs like P90X and 4HB. I’d get close to 3 months and switch off the program for whatever reason. With CrossFit and Paleo I’ve found the magic combination. I love each workout (even when my body hates it) and look forward to going to the gym.

Now that I’ve passed the hump I don’t see an end. I plan to do this for a very long time. Today at the gym I did 3 reps of 260 pounds in the deadlift and it was a great feeling. I’ve never moved that much weight in my life. It was almost easy.

If you want to know more about my story starting CrossFit, read CrossFit: Open Source Fitness. If you want to learn about the Paleo diet, check out The Beginner’s Guide. If you want to check out my progress head over to my CrossFit WOD blog where I keep track of everything.

Last week in Sayulita, Mexico I worked out almost every day. One of the workouts I came up with involved box jumps, so I used this, which was a bit less than 2 feet tall. You can workout anywhere with a little creativity. [end]

Baker is one of about 425 employees at Reebok who are taking part in a new fitness program that is transforming the sneaker maker’s Canton headquarters. Participants lost over 4,000 pounds collectively during 2011 – roughly the weight of an small SUV.

Nike and Adidas have always been my go-to brands for exercise shoes and clothes. I’ve never owned anything made by Reebok until this past November. I’ve gained a new respect for Reebok because of their support for CrossFit and the culture they are encouraging with their employees. I’m looking forward to the new commercials they have coming out.

If you want to get an idea of what CrossFit is about, check out ESPN2 tomorrow afternoon. They are airing a CrossFit Games marathon.

I got this Reebok CrossFit t-shirt from my Mom and Dad. It says, “How you do anything is how you do everything” and has some silhouettes of people excercising. It’s my favorite gift because they bought something that reflects who I am. After hearing me talk about my workouts for the past 2 months I guess they figured out I’m loving CrossFit. 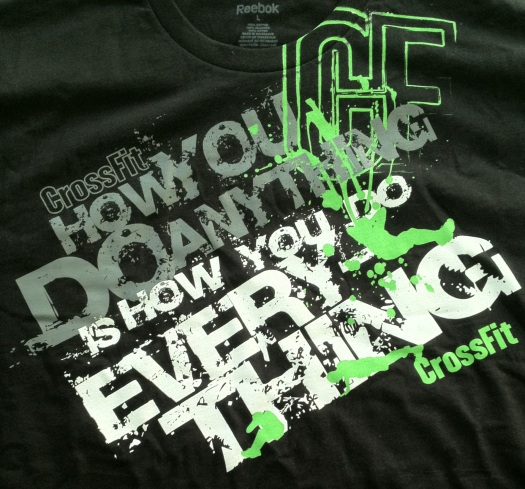 Killer CrossFit workout today! 696 lunges, 69 burpees, and 69 box jumps. I may not be able to walk tomorrow.

My hands started to tingle. I pushed with my hamstrings and ass to finish another air squat. Thirteen. I bent over and placed my hands on my knees. I could barely breathe. I was getting light-headed. What was going on? I stood up and did another squat. Fourteen. One more. Fifteen. I dropped to my hands and knees. No more.

A couple of minutes passed. I stood up and attempted to stretch. I felt dizzy and had to sit on the ground for a few minutes. I stood up and walked to the open door for some fresh air. It didn’t help. I sat on the plyo boxes for a minute but quickly moved to laying on the ground. This trainer is either worried about me or holding back a laugh. I’m glad no one else is here, because this is embarrassing. 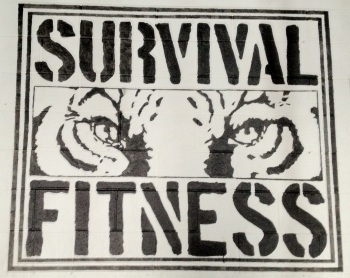 It was October 31st and I had just completed my first CrossFit mini-session with Matt at Survival Fitness. I think it was about a half hour before I was able to leave the gym. When I got home I spent about an hour laying on the couch. My body was exhausted and I felt terrible. But the only thing I could think about was going back on Wednesday for another workout. It couldn’t come soon enough. I was hooked.

So what did I do in that first workout? It started off with a 5 round Tabata circuit of high knees, butt kicks, and mountain climbers to warm-up. If you’ve never heard of Tabata, it’s a form of high intensity interval training which uses 20 seconds of exercise followed by 10 seconds of rest. The warm-up was a piece of cake.

For the workout of the day (WOD), I was to do a circuit of 5 ring rows (instead of pull-ups), 10 push-ups, and 15 air squats. I’d repeat as many rounds as I could in 20 minutes. It sounded easy enough. In CrossFit, this WOD is well-known. It’s called “Cindy” and is one of the benchmark girls. I was only able to complete a measly 3 rounds and 7 minutes hadn’t even passed on the timer.

I met with Matt two more times for mini-sessions. During the second week I went to my first CrossFit class, which only had 2 other people attend. When I looked at the WOD on the whiteboard, I wished I was in another 1-on-1 session with Matt. We were going to do “Murph” which is a one mile run, 100 pull-ups, 200 push-ups, 300 air squats, and another one mile run. The nice thing about this WOD is you are allowed break up the pull-ups (ring rows as a modification), push-ups, and squats however you like. Yep, you guessed it, breaking them up Cindy-style is usually the way to go. I’d be lying if I said I wasn’t a bit terrified.

For the warm-up we did eight Tabata rounds of our choice. I think I switched between high knees, but kicks, and jumping jacks. I felt ok during the run considering I hadn’t run anywhere other than after my hat on the golf course since spring. I finished the mile in 8:20. I wasn’t really worried about that though. I was worried about the middle of the WOD. When the timer hit 45:00 I had completed 13 rounds! I didn’t get to 20 or even start the second mile run, but I couldn’t have been happier. In 7 days my body had made an incredible improvement. I was getting fit and having a blast doing it.

Part of yesterday’s workout (shown to the right) included a mile run as part of the warm-up. I finished in 7:47 today and it was a brutal 45° outside! In 2 weeks I knocked 33 seconds off my time. Each day my endurance is getting better and I’m getting stronger. I feel great!

I’ve run and rode a bike for exercise many times. I’ve done P90X and Insanity. I’ve always gotten bored after a few months and stopped working out. I’m confident I’ve found the holy grail of exercise programs with CrossFit. Each workout is different so I shouldn’t get bored with the repetition found in other programs.

CrossFit in unique in the way it defines fitness (PDF download). It’s all about using functional movements to prepare trainees not only for the unknown but for the unknowable. This type of fitness can prepare an individual for any type of sport. CrossFit is actually known as the sport of fitness.

I’m also enjoying CrossFit so much because it has similarities with other big parts of my life. CrossFit shares some similarities with WordPress, especially with the online community. Some people outside the community actually call it a cult! Each day on crossfit.com you can get the community WOD and share your results in the comments with other athletes around the world. The site shares videos with instructions on how to do all the movements. There’s a wealth of information on the web site and nearly everything is free. The part that’s not free is in the CrossFit Journal which costs $25 a year. Everything is very similar to the open source foundation WordPress is built on.

CrossFit is also similar to golf because it’s all about improving and beating yourself. All of the WODs are based on completing a workout as fast as possible, doing as many rounds as possible in a period of time, or lifting heavier weights. Everything is measured. In golf, any Joe Nobody can compete in local qualifiers, maybe the sectional qualifier, and have a chance to play in the US Open. The CrossFit Games, which determine the “fittest on Earth”, use a similar system. You can start doing workouts in your garage and end up competing against a world champion. In the 2011 CrossFit Games, the individual male and female winners were awarded $250,000 each! It’s no joke.

When you get down to the roots of CrossFit, it’s all about improving yourself. Working out to get in the best shape possible. Practicing functional fitness to be prepared for anything. Eating right to promote a healthy life and get the most out of each WOD. Helping others in the community.

I’ve been doing CrossFit for 3 weeks now. I’ve read more articles and watched more videos than I can count, attempting to absorb as much as I can. Hopefully I’m still doing a WOD three months from now and three months after that. Follow my workouts at crossfit.nickmomrik.com and let me know if you have any questions. If you’ve been struggling with your exercise routine, look into in. Survive the first workout and you might be hooked like me.

Here are some pictures from Survival Fitness where I’m a member:

This is the logo at the CrossFit box (gym) where I’m a member. 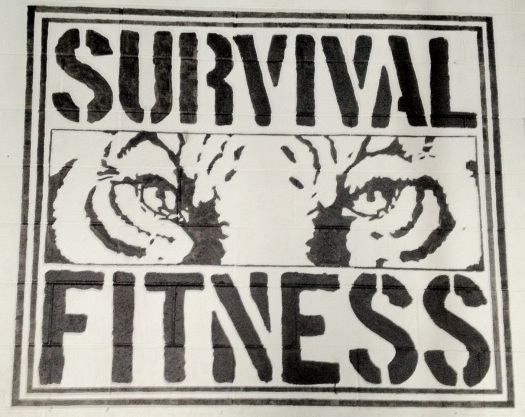