I was given a “newer” microwave and installed it yesterday. Here’s the before and after…

When I took the old black one out the original receipt (complete with the buyer’s full credit card number!) was still attached to the power cord. It was purchased in 1995 and still worked well, but the control panel was ready to fall off because several tabs were broken. The stainless steel of this other one matches my fridge, which is nice. The receipt was also with it and it was purchased in 1999. Not much newer, but in really good condition. It’s a nice boost from 850 to 1,000W and the inside is roomier. Each of these microwaves cost around $350 in their day and you can get a brand new one for half that now.

They obviously made these safety instructions before CrossFit was around, because I was able to install it by myself.

I don’t have to think as much about efficient button pressing because I can start 30 seconds, one minute, two minutes, or three minutes all with a single press. It also has a button for adding an extra 30 seconds at a time, which is much more useful than the one minute adding on my old machine.

Of course I wasn’t just going to toss the old microwave in the trash. I took it apart and salvaged a bunch of goodies. 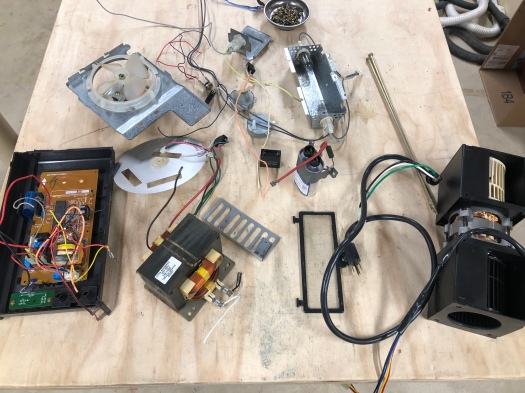 I got fans, motors, lights, capacitors, temperature sensors, a huge transformer, and the control panel which has a lot of useful relay circuitry.

I'm searching for the perfect golf swing and my first hole-in-one. I'm addicted to CrossFit. I work for Automattic.