Heart rate variability (HRV) is the physiological phenomenon of variation in the time interval between heartbeats.
Wikipedia

What does that mean? Our hearts don’t beat at regular intervals. There may be a heart beat 1 second after the previous beat, the next beat might be 1.2 seconds later, and another may be 0.75 seconds after. It varies and that variance changes all day long depending on what we’re doing, what we’re thinking, how we’re feeling, how much we eat, how hydrated we are, etc.

I learned about HRV five or six years ago and used the iOS app ithelete paired with a chest strap to track my HRV each morning. It was a pain in the ass and it was really tough to get any meaningful results. Fast forward to 2019 and I wear a WHOOP band, which automatically handles all of the HRV readings and data. It has become a very valuable tool for my exercise and recovery.

If you’d like to learn more about HRV, I highly recommend the latest episode of the WHOOP podcast, Podcast No. 29: Heart Rate Variability (HRV), with Kristen Holmes and Emily Capodilupo. They did an amazing job explaining what HRV is, why it’s important, how it can be used, how WHOOP uses it, and strategies for improving your own HRV. I learned a ton from listening to this episode.

Last night I finished Fleabag, an Amazon Prime Original series. It was two seasons of six short (<30 minute) episodes each, so it’s an easy binge watch. It won’t be a show for everyone, but I enjoyed the humor and storytelling. There aren’t plans for future seasons, which is always refreshing to see.

Cameron Champ’s 351 yard drive on #1 in round one of the Rocket Mortgage Classic. Bombed it!

Watching the Rocket Mortgage Classic in Detroit. These guys are good! 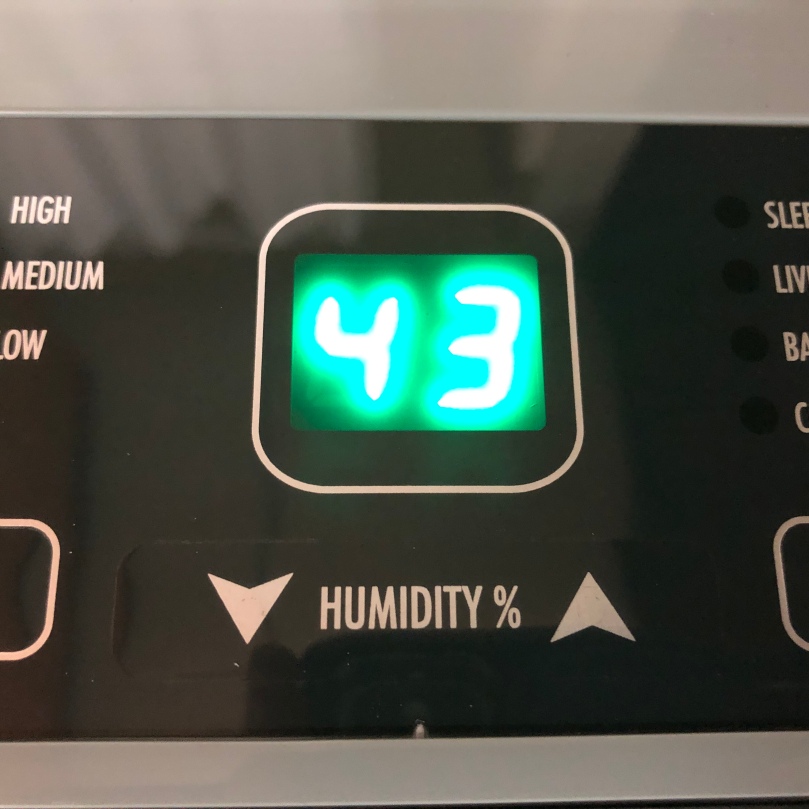 I finally got a new dehumidifier for my basement workshop. It has a built-in pump so it’s easy to have it drain to the shower that is down there and I won’t have to worry about emptying it. When I plugged it in last night it was reading 66% humidity so it’s already dropped a lot in less than a day. Should help to save all of my tools.

After getting a set of AirPods this year I thought it would be nice to have wireless charging at my desk. I like using the touch pad on my MacBook pro, so this mouse pad drawer doesn’t get used and I got the idea to embed a charger in it. 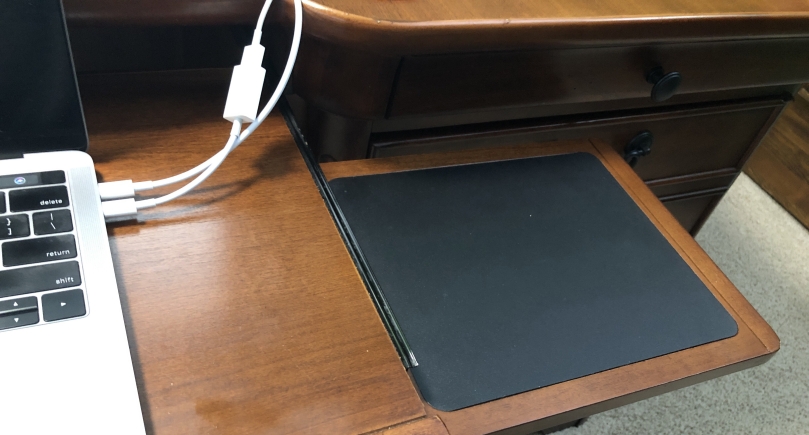 I bought a cheap $10 wireless charger.

It won’t charge very quick, but it doesn’t have to when I’m sitting there working most of the day. I figured it would be a fun project and the worst that could happen is I fail and I’m out $10. I opened up the case and there wasn’t much to it. 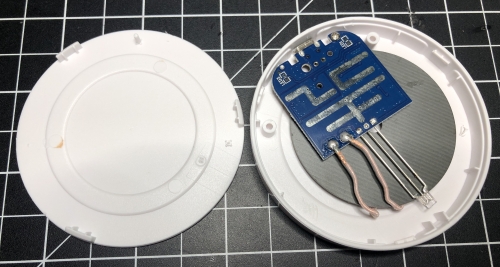 Then there was only one small screw to remove and the electronics were free.

I forgot to take any other pictures until I had put everything back together. After pulling up the top of the mouse pad, there was some foam underneath. I traced the electronics and USB cable to make a cut out in the foam. Then I used a chisel to carve out the particle board until there was a deep enough recess. I drilled a few holes for wires and the LED. I had cut the LED off of the circuit board so I could route it to the front of the drawer. I soldered on some wires to connect the LED back to the board, hot glued everything in place, and then used super glue to put the mouse pad top back on. Overall it was an ugly hack job. Over to the right is a picture of the holes and wiring underneath.

Check out this short video of the charging in action.

BTW, the mouse pad drawer has two identical halves, so if I ever decide to use a mouse again (it’s been at least 5 years since I had one), I’m good to go.

In the past I tried an Alfred workflow for inserting emoji, which was pretty terrible. When I upgraded my computers to Alfred 4 this weekend, I went on a hunt for a real solution and found The Alfred Emoji Pack, which is great because it uses the built-in snippets feature. After you launch Alfred, type your shortcut for Snippets (s in my case), a colon, and some text. It’ll show you suggestions and when you pick one it will be pasted in to whatever app you’re using at the time.

Where it really becomes powerful is when you turn on Automatically expand snippets by keyword in Alfred.

Over a decade ago I had one of the first Odyssey 2-Ball putters and for the last eight years I’ve been putting with an Odyssey White Ice D.A.R.T. Yesterday I picked up this Odyssey Red Ball putter and drove straight to a golf course where I broke 80 for the first time this year. 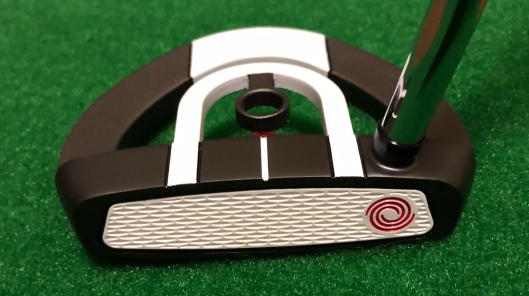 The Red Ball will help me align everything properly and consistently each time I address a putt. With good speed it will translate to more made putts and lower scores.

I really like how an oversized putter grip gives me more feel. I’d been using a Super Stroke Slim 3.0 since 2015, a Winn Jumbo Lite before that, and I just got done installing a Super Stroke Traxion Tour 3.0 grip on this new putter.

I’m dealing with a calf strain as well as babying my back after a couple of tweaks, so I’m exercising in the garage more than normal. I don’t usually put workouts on this site, but what I came up with today was fun, so I thought I’d share.

The first workout was a pyramid of single arm dumbbell shoulder presses. Start at 5# and do 5 reps on each arm. Add 5# each set, continuing to do 5 reps per arm. Repeat all the way up to 50#. Do a second set with the 50# dumbbell for each arm and then decrease by 5# each set back down to 5#. It ends up being 20 sets for 100 total reps on each arm.

The second workout I did was:

Give these a try and let me know what you think.

These Kit Kat ice cream cones will make anyone happy.

What you see in the background is my default page in Chrome, from the Momentum extension. The image and text change daily.

I'm searching for my first hole-in-one. I enjoy being active and making things. I work for Automattic.