If you didn’t read the intro post about my nutrition experiment, go check it out.

So… how long is this experiment going to last? Good question. It could be as short as a week or two if it goes how macro counting usually does for me. Did I mention I hate counting calories? Hopefully it’ll last at least a month or two. By publishing posts, I hope it keeps me accountable and I stick with it.

I jumped on the scale on the 30th, yesterday, and today. The average readings were 199.3 pounds and 15% fat mass. Glad to see I’ve been stable for the last 6 months.

After 3 days of eating I had a decent baseline of my caloric intake, though I pretty much ran out of junk snacks in my house and didn’t eat out at all. On the first day I could feel myself altering habits because I could see the numbers in MyFitnessPal and had already decided what my macros would be to start the experiment. For days two and three I kept notes and logged everything at the end of the day. 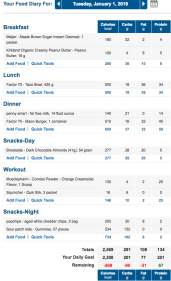 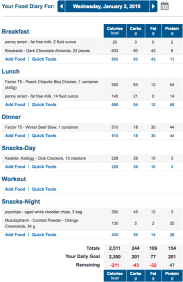 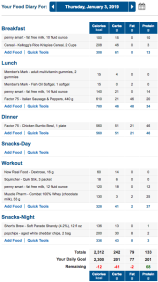 My daily averages were:

I hadn’t been paying attention to the labels before this, so I didn’t realize how high in fat a lot of the Factor 75 meals are. I had already made the switch from 2% milk to fat-free, otherwise my fat numbers would have been even higher. Since milk is 85-95% water, I counted it 100% to make it easy. I know I was already adjusting to drink more water, so this is a lot higher than it normally would be.

Based on reading the Renaissance Diet 2.0, I’m going to shoot for:

My calorie intake was actually pretty close. I expected to be low on protein, but not that low. I need to replace some carbs and fat with protein and stick with my increased water drinking. The book recommends “1.5 ml of water per calorie eaten,” which would be 116oz. Considering we get 20% of our water intake from the food we eat, I’ll aim for 100 ounces.

I will not be using different macros depending on if it’s a workout day versus a rest day. Makes everything easier. In order to set goals by grams in MyFitnessPal you have to pay for a membership, which I’m not going to do at this point, so it looks a bit different in there.

If I eat four balanced meals a day they would need to be 50 grams of protein, 55g of carbs, and 17.5g of fat for 578 total calories. Based on the high fat F75 meals, I’ll have to go almost fat-free in two meals per day.

Since the inspiration for this came from CrossFit’s season 2 of Killing the Fat Man, I wanted to see how these numbers compared to the Zone diet recommendations (PDF). I have no idea if I should categorize myself as “Large male” or “Athletic – well muscled male” though. A large male gets 19 blocks per day, which comes out to 133g of protein, 171g of carbs, and 28.5 grams of fat for a total of 1,473 calories. Using the athletic recommendation of 25 blocks would be 175g of protein, 225g of carbs, and 37.5g of fat for 1,938 calories. Both of those plans seem low.

The Zone diet is weird though. You’re only supposed to count the blocks for the most prevalent macro in a food. For example, steaks have a good amount of fat, but it doesn’t get counted because you only use it as a protein source. Maybe this is where they make up for those caloric deficiencies. Another odd thing about the Zone diet is their “blocks.” Is it to try to trick people into thinking they aren’t counting calories? News flash… if you’re keeping track of macros you’re counting calories! Having to convert everything to blocks adds extra math to something that is already confusing for people.

Enough about the Zone. The experiment begins today. Yesterday I had to actually go grocery shopping for something other than milk so I’d have sources of protein and carbs. 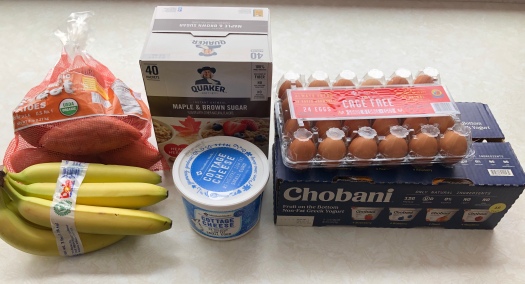 Last night I boiled and mashed all five pounds of sweet potatoes (froze half) and I hard-boiled and peeled a dozen eggs. Does that count as meal prepping?

Over the years I’ve tried a lot of supplements. My experience matches up with what the book says… most don’t work and the expensive stuff doesn’t produce enough of a boost in results for the money. Caffeine, protein, creatine, carbs, multivitamins, and Omega 3 are about the only things that have been proven to work. Experiment for yourself because your body might react in a different way.

I like MusclePharm protein because some of the flavors are like having dessert, it’s cheap, and you can always find deals somewhere. The 100% Whey is for after a workout. The Hybrid Series is a 5 protein blend, which releases over eight hours, and I use it in the morning or before bed. My intra-workout drink is made with 3 Sqwincher packets of electrolytes (providing flavor), creatine, BCAAs, and dextrose. I’ll take the fish oil and multivitamin with breakfast.

Last night I decided to plan out everything I’d eat today. Takes all decisions out of it and means I don’t have to pack in calories at the end of the day if I’m low on a macro. Feels like it’ll remove some stress from the process.

All of these posts will be tagged 2019 calorie counting to make it easy to browse the posts.