It’s February 27th and I just got done with a workout in my garage. The unusual thing is I was able to do some farmers carry work outside and some running because it’s so nice out! I’d love if this weather was here to stay, but this in Michigan, so I know better.

After updating apps today I got this pop-up. Check out the first option. Guess I’m uninstalling the Calendar 2 app!

Back in early November I found this Delta TP305 planer for $100 on craigslist. 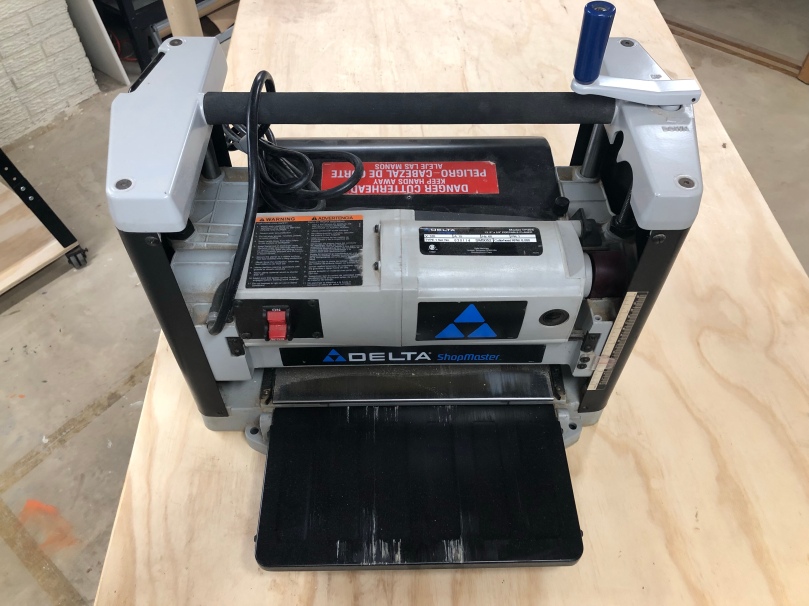 It was obvious the owner took care of his tools, he had just replaced the blades, and also had a set of new blades, so the price was a steal. It didn’t have any type of dust/chip collection though. 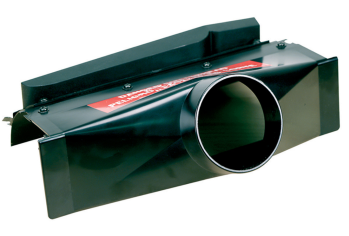 When Delta produced this planer, the dust collection attachment was an extra accessory. I decided to make my own because I don’t understand this design. Why would you want your hose hanging over the outfeed? Too much risk of the work piece getting jammed on the way out, which is extremely dangerous.

I found a neat idea on YouTube and went with a similar plan. Here is what the outfeed looks like normally.

I first cut some pieces to make the sides and bottom of a box.

I screwed the right side together. Then I held it up against the planer to get the exact positioning before screwing in the left side. I wanted a snug fit.

I cut and sanded a hole in the side for some PVC parts. 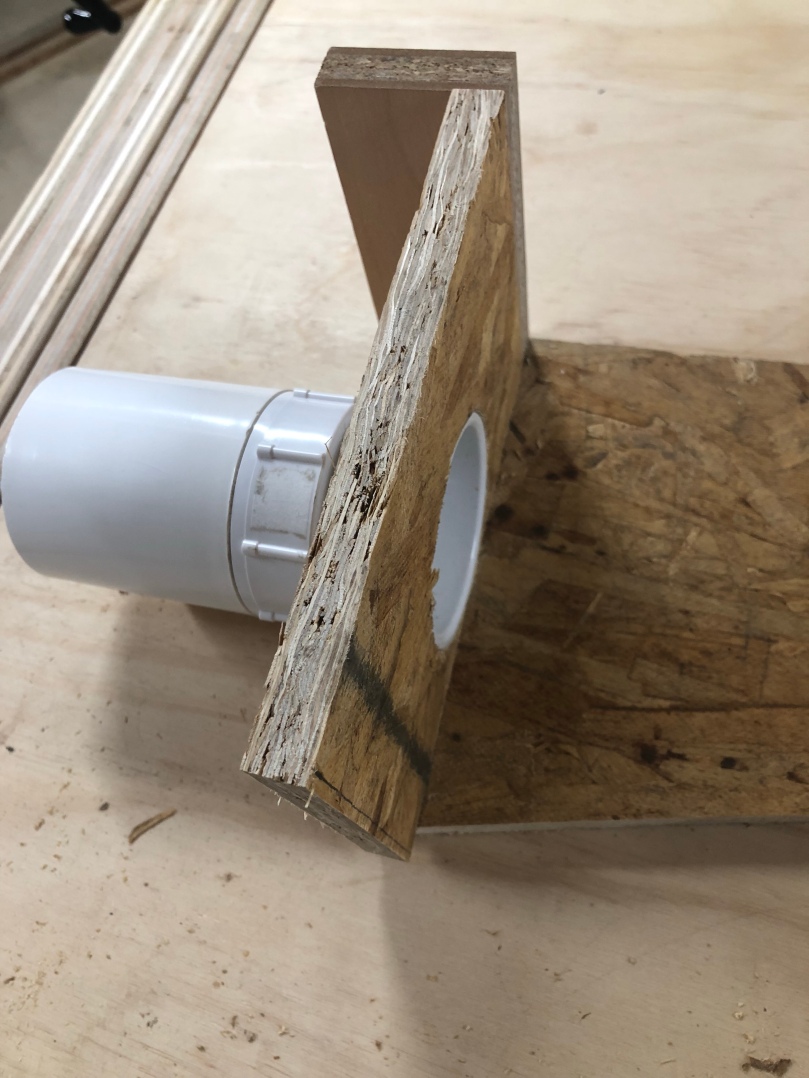 Grabbed a few scraps that would be used to hold the PVC in place. 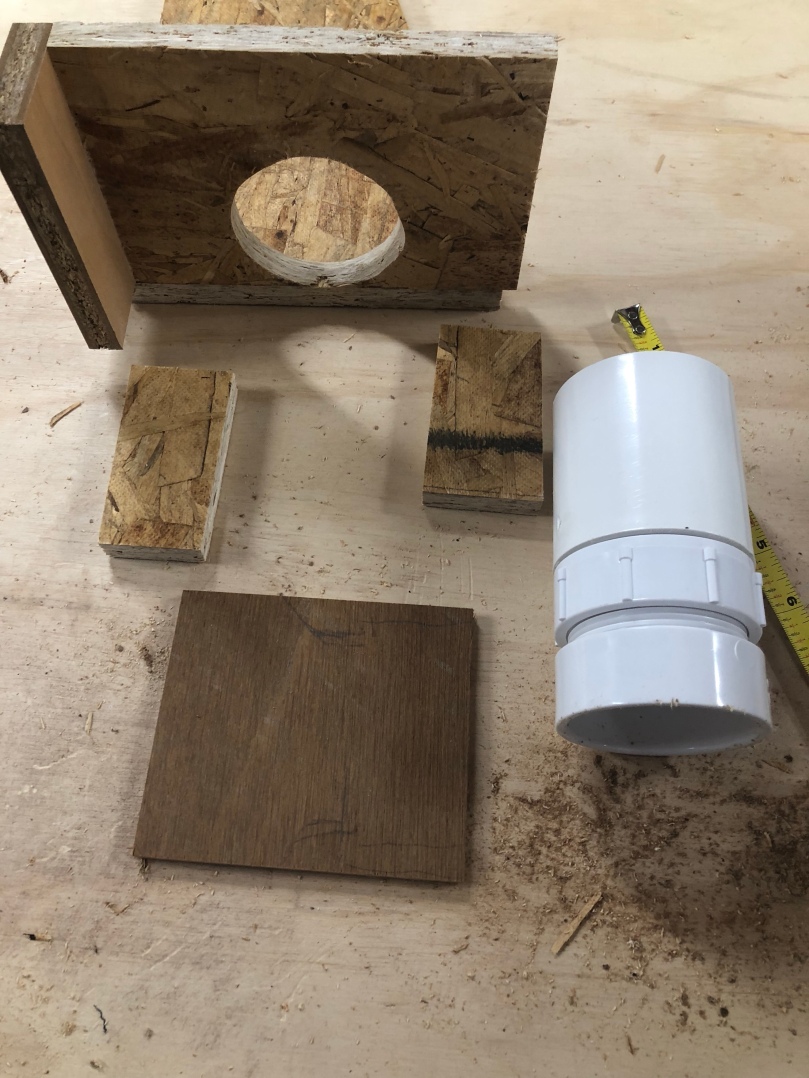 Cut a hole in the thin piece, boxed in the male PVC part, and screw it all together. 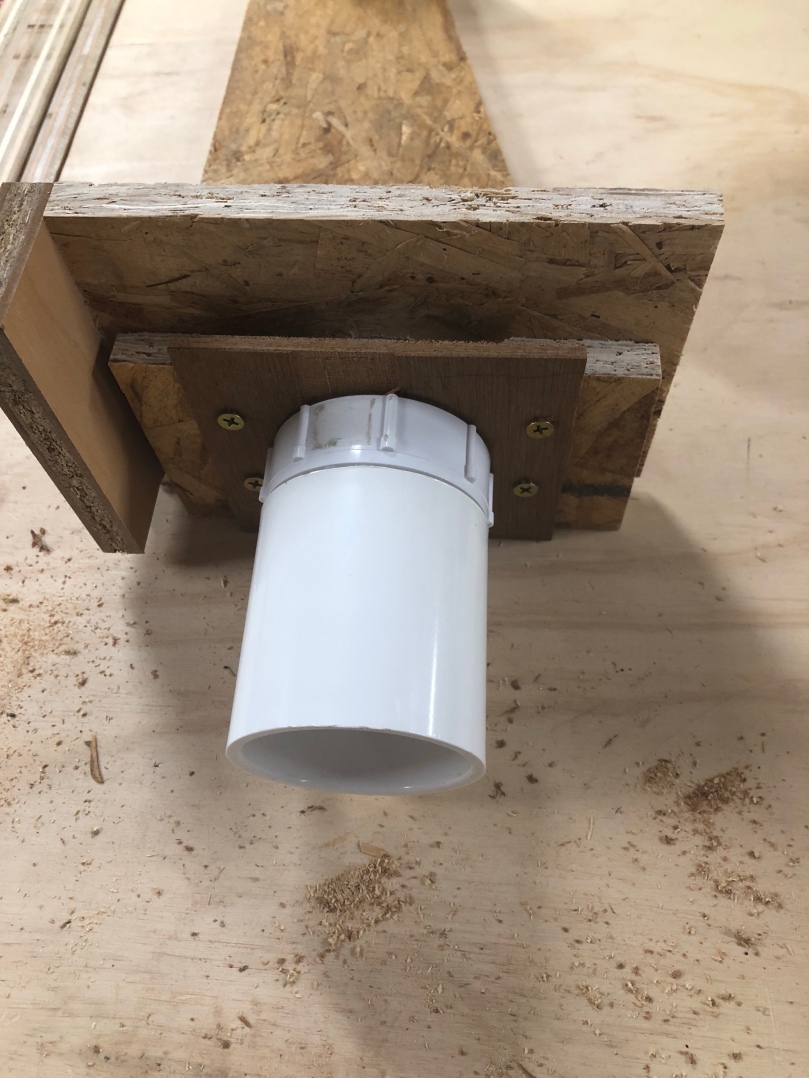 Then I put a spacer under my in-progress box and adjusted the planer’s height. It was important to use a spacer for these next steps because I don’t want the bottom of the box to have any chance of jamming up the wood coming out of the planer. I gave it about 1/8″ of breathing room.

I cut a piece for the top. Then while putting pressure on the edge that makes contact with the planer dust chute I screwed this piece to the sides. At this point I was able to remove the spacer because the tight fit was able to hold the box in place.

I wanted to prevent the box from sagging or shifting down during use though. So I cut two little pieces. 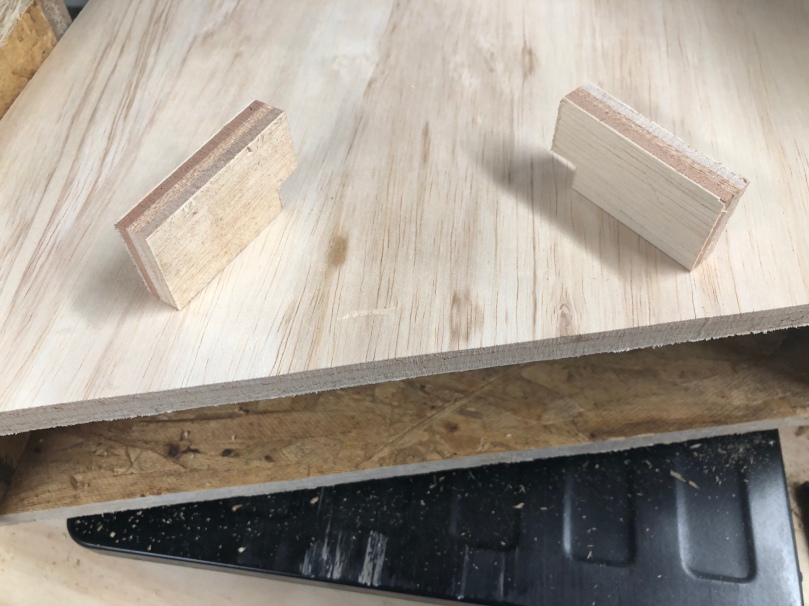 Screwed them in from the bottom on each side.  Notice how the kind of grab on to some ledges of the planer. This is a simple way to prevent the bottom of the box from going any lower. 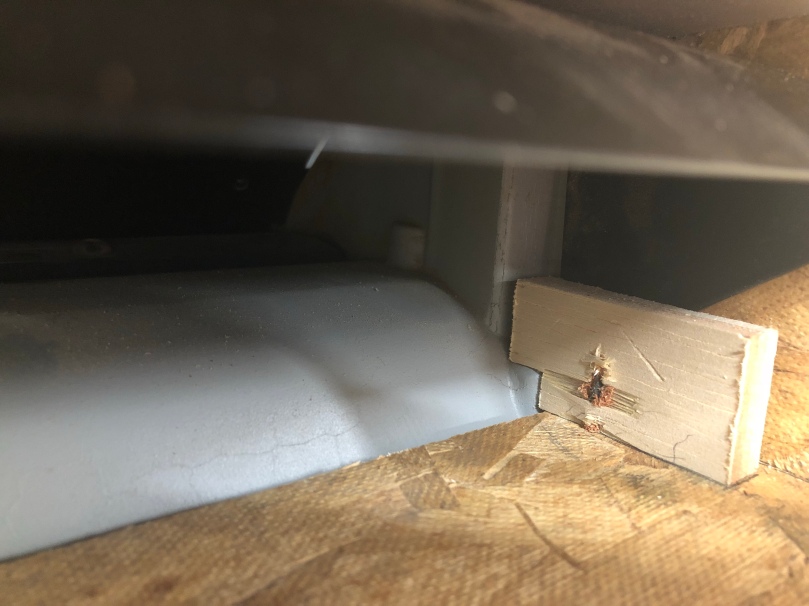 I drilled a hole in the top and through the metal chute. Combined with the tight fit and those blocks, now this thing can only shift up and away from the outfeed path. 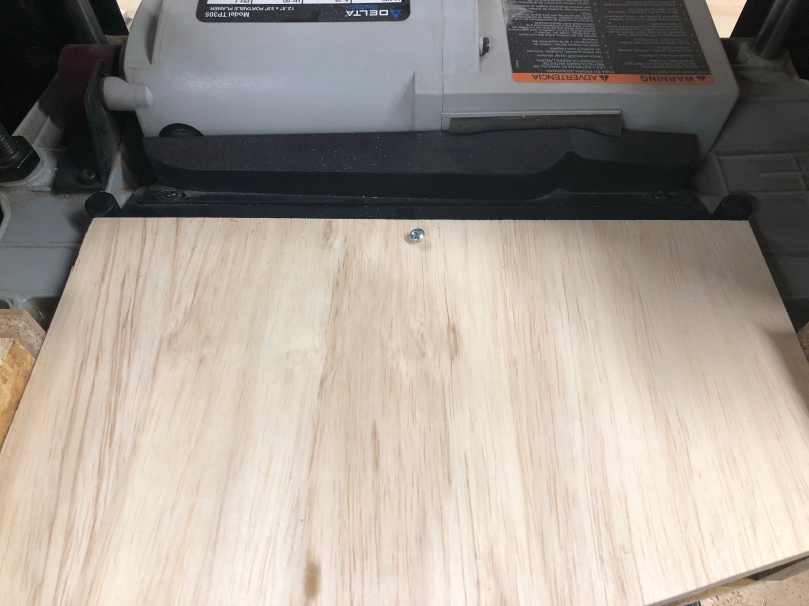 The final step was to square up the back edges, cut a piece, and screw it in. There are no screws on the bottom of the back face because I used a scrap piece that wasn’t tall enough to have room for screws there. I did use some glue though.

Here you can see the clearance between the box and the outfeed I mentioned earlier. 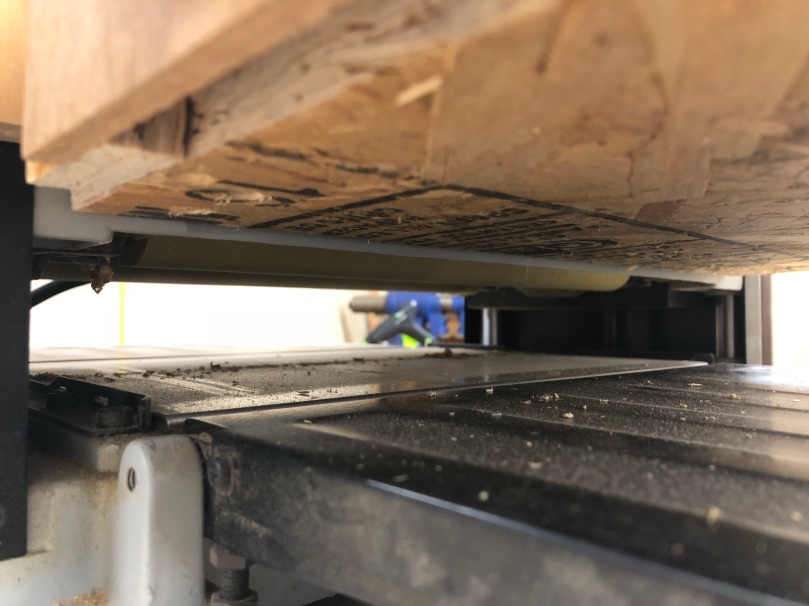 Due to the materials I skipped using any wood glue except when I put the back face on. I did go back and hot glue all of the joints so it would be sealed for a better vacuum.

This was an easy build. The only modification to the planer was the screw hole and the whole unit can be removed by taking out that screw.

How well does it work though? You be the judge…

I can’t remember the last time I opened a bottle of wine at home, but it sounded good tonight. This is mighty tasty! 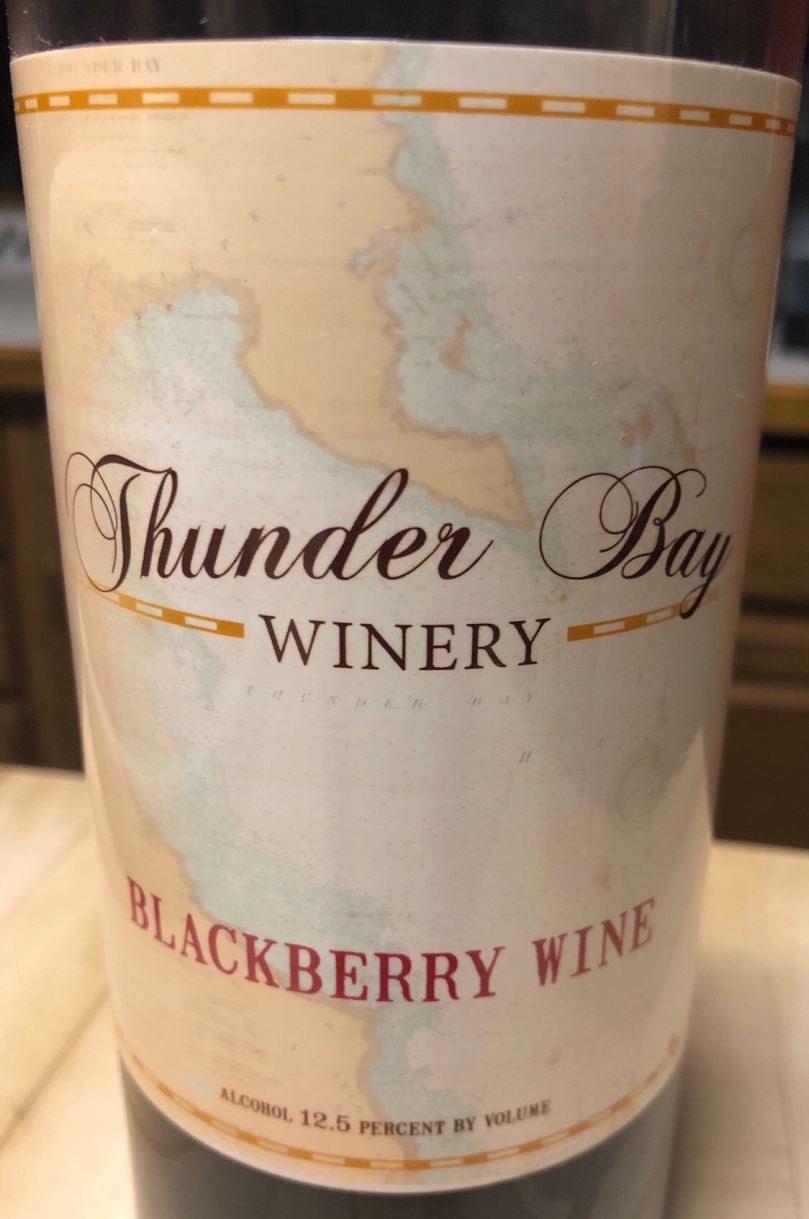 Opening the bottle was almost a disaster.

Pieces of the top kept breaking until I remembered I had a better bottle opener and then the cork came right out.

Probably the best face I’ve ever noticed. It even has teeth!

I previously had all of these squares hanging on their own hooks. This is just a scrap piece of plywood with some slots cut on the table saw.

The first workout of the 2018 CrossFit Games Open will be announced tonight. I’ve competed in every open since 2012, until this year. After the gym changed ownership last year, the CrossFit affiliation wasn’t renewed (which I have no issue with), so it’s a bit of a hurdle to compete in the open. I’d either have to record a video of every workout (following specifications that are a pain in the ass) or travel to a CrossFit affiliate in the area. I don’t care to do either.

Last year was the first year I allowed myself to redo the workouts and try to improve my scores. The fatigue built up and I paid for it with that bad back tweak a few reps into my 2nd attempt of the 4th workout. Over the last year I’ve had to do a lot of scaling in the gym and haven’t lifted very heavy. For the last few months I’ve been focusing on rehabbing my back, which seems to be helping, but I don’t want a setback at this point.

I’ve realized there is no reason to take it all so seriously. I’m not going on to Regionals or even the Masters online qualifiers. How well I perform in a workout isn’t going to change anything about my life. I do CrossFit for my health, for the challenge, and to feel good. Don’t get me wrong, I’m working to get back to the big lifts, but if I don’t get there it’s ok.

I’ll still do the Open workouts this year and if I have to scale something, so be it. Without getting so serious and putting any extra pressure on myself I’ll probably enjoy it a lot more too.

I'm searching for my first hole-in-one. I enjoy being active and making things. I work for Automattic.